By coherently combining multiple ultrafast fiber lasers, the power limitation of a single fiber can be overcome. In this kind of coherent combining device, a polarization beam splitter (PBS) is generally used for beam combining (as shown in Figure 1(a)), but this kind of device is more complex, and as the number of combined channels increases, The occupied volume will become larger and larger. The Jena research group in Germany proposed a method of combining the segmented reflectance beam splitter (SMS), as shown in Figure 1(b)(c). 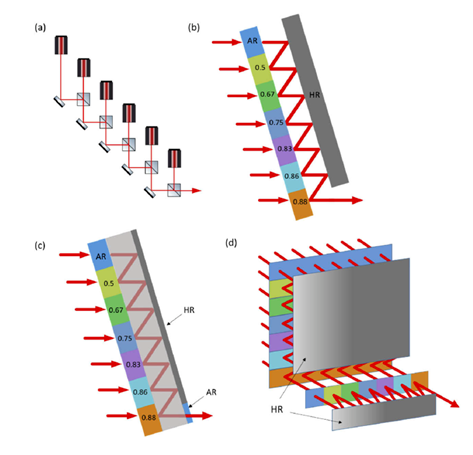 Figure 1 (a) Schematic diagram of the combined beam system (b) Schematic diagram of the SMS device. The value is the reflection coefficient of the beam splitting surface. When the input beam array power is uniform, the amplitude can be completely matched. (C) Overall SMS, that is, all coatings are deposited on a single element (d) Expand the combination into a two-dimensional array, and each SMS has the same coating distribution

SMS can be manufactured with only one or two optical elements. For the synthesis of multiple ultrafast laser beams, the dual-unit air spacing design can minimize the nonlinear effect and the dispersion effect, and the device can also be extended to two-dimensional beam combination, as shown in Figure 1(d). In order to achieve perfect amplitude matching in the beam combining process, a special coating part must be used at each beam splitting or combining node. However, for each beam of light, a reflection area with a specific coating is required, and the device is still more complicated. Since the influence of amplitude error in coherent synthesis is smaller than that of phase error, the Jena research group proposed a simplified design that can share the coating.

As shown in Figure 2, this article introduces three simplified design strategies for SMS. In each simplified design, the first input beam passes through the fully transparent coating part, while the remaining N-1 beams of incident light will be incident on 1, 2, or 3 coating sections whose reflection coefficients are determined by the optimization algorithm. Under the assumption of perfect phase matching, the overall synthesis efficiency is taken as the objective optimization function, and numerical methods are used to solve the simplified SMS design parameters.

Figure 3 shows the theoretical synthesis efficiency of three designs combining up to 40 beams in a single SMS. These simulations assume ideal HR and AR surfaces (the actual situation can be simulated by adjusting the parameters). As the number of coatings increases, the optimized coating cross-section can be closer to the ideal amplitude matching situation, so higher synthesis efficiency can be achieved, but the marginal benefit of the number of coatings will rapidly decrease. Two-dimensional beam combining can be achieved by using two identical simplified SMS. 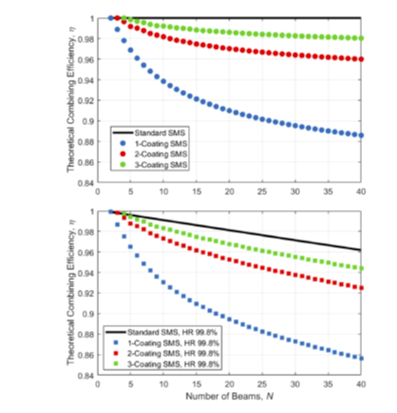 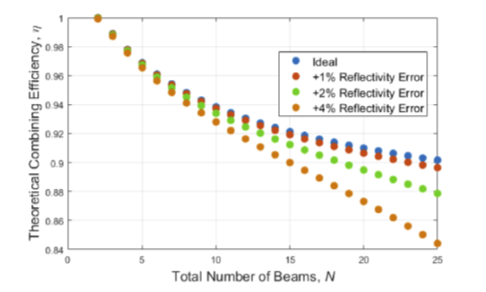 The article also discusses the potential of simplified SMS in beam splitters. When SMS is used as a beam splitter, the optimized coating design is the same as the design idea of ​​a beam combiner, but some additional effects must be considered. The uniformity of SMS optical splitting is very important in the fiber CPA amplifier system. Some optical processes will be affected by the absolute energy in each core, which in turn affects the uniformity and synthesis efficiency of the amplified beam. Therefore, the ratio of the minimum and maximum beam power output by SMS as a beam splitter is an important reference for its use as a beam splitter.

For the case of 5-25 beam splitting, the splitting situation of the three-coated SMS is shown in Figure 5. In the ultrafast fiber CPA amplification system, due to the uneven distribution of the seed light, the accumulated nonlinear phase (B integral) is different during the amplification process, and in the fiber, this change is due to the high peak power of the fiber core And longer path lengths. Therefore, the influence of non-uniform beam splitting with simplified SMS beam splitting depends to a large extent on the parameters of the optical fiber system.

In summary, this paper presents an SMS numerical analysis for the simplified design of coherent beam splitting and beam combining. Since the impact of amplitude mismatch in the coherent combining process is relatively weak, effective beam combining can be achieved by reducing the number of coatings, which greatly simplifies the manufacturing process of these optical devices.